Around Veterans Day every year at Boone Hospital Center you will find a beautiful mural where employees share their well wishes and thank-yous to veterans. Those murals were made by Lead Orderly Amber McLelland who is a veteran herself.

Amber enlisted in the year 2000 at just 17 years old. Her sister and two cousins were already in the army, and she had been considering joining for a while.

“I wanted to serve the greater good and have some life experiences along the way,” says Amber.

Amber did her basic training at Fort Leonard Wood, Mo. and she was there when the attacks on 9/11 happened.

She was then stationed as a military police officer working the Pentagon clean up. She worked to clear debris and patrol for safety.

After that, Amber was stationed at Fort Riley in Kansas where she underwent Afghanistan prep. She ended up being placed stateside to work with war equipment.

She spent some time stationed at Fort McCoy in Wisconsin before being discharged and moving back to Missouri.

Since leaving the army, Amber has found comfort in her drawing.

“It was a way of dealing with my PTSD,” says Amber.

When she was back in Missouri, she started looking for jobs where she could continue to help people. She says that’s why she applied to work at Boone Hospital. Amber was hired as a housekeeping tech. When Veterans Day came along, she had the idea to make a mural that her co-workers could sign in support of veterans.

“I thought to myself that if a veteran had just one person who told them they mattered, they did a good job, that if someone just showed they cared, would that soldier still take their own life? It’s dark and sad to think about, but it’s the real truth. Sometimes when you’re on the ledge looking down, you think to yourself, does someone care enough to pull me back? For those who have never been there, it’s a feeling of complete despair. If you can get help that’s great, some don’t seek help, out of shame and embarrassment. I wanted my murals to be a voice of inspiration, of compassion and gratitude,” says Amber.

Everyone at Boone Hospital loved her mural, and it got lots of signatures. Once it was signed, Amber took it to the VA Hospital to display it for the veterans there.

“The look on their faces would say it all. They were so touched. Some even started crying,” says Amber.

Amber spent one year as a housekeeping tech before becoming an orderly. After just three years as an orderly, she was promoted to lead orderly. As an orderly Amber works in patient transportation, patient lifts, helicopter pad transport, and more. As lead orderly she also provides training to other Boone Hospital staff.

“I love my job. I love being able to help people every day. Helping to make someone’s stay better, being a team member to those in need, making people feel seen and heard, providing comfort and support; those are the biggest things that make my job worth doing every day,” says Amber.

Every year around Veterans Day, Amber continues to draw a mural with room for other staff members to write messages to veterans. Once it has been signed, she takes it to the VA Hospital for veterans to view. After the murals spend some time at the VA Hospital, they go to the VA home in Mexico, Mo. for other veterans to enjoy them. 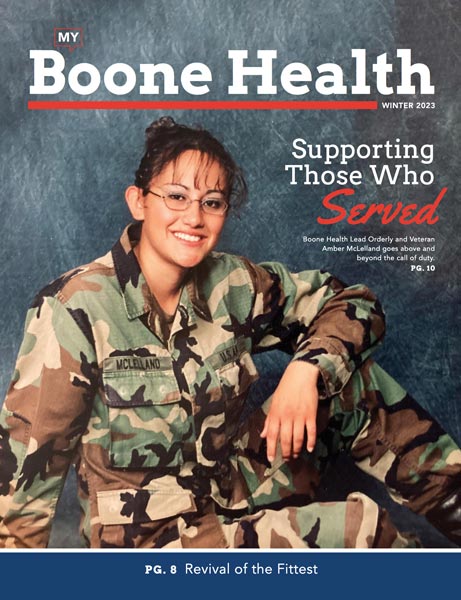